Did I say they love Skin Whitening Creams? Really? I should have said: “they really, really, REALLY LOVE SKIN WHITENING CREAMS!” I’m still waiting to see the report that one of them actually turned white… but perhaps not as anxiously waiting as they are…

Indian writer John Mathew wrote, “Sales of skin whitening creams have outstripped sale of Coca Cola and tea in India. It also says that the market grew at 18 per cent and will touch 25 per cent growth this year. I don’t know where this will end… Every beauty product company has a whitening cream in the market these days.”

A recent trip to Tosco Supe 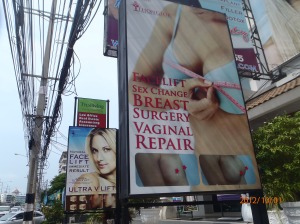 rmarket here in Chiang Mai helped me to understand why Thais and other Asians are vulnerable to such marketing. I strolled down the aisle of CDs and movies. They were all empty, violent, “also ran” movies that Hollywood typically markets overseas. Farang boyfriends constantly gripe about how their Thai girlfriends and wives only watch immature, extremely silly cartoons and slap-stick comedies. The level of education is low for most people (jr. high to high school), but the whatever they’re teaching in the elite universities doesn’t seem to raise their level of self-love.) Thai T.V. commercials are very … white. Even the movie starts are the whitest Thais they can find. There seems to be “pro-white skin” messages every where. Who does this all benefit? Certainly not average Thais who are almost being taught to devalue their beautiful skin tones for the benefit of yet another group of corporations without conscious.

Across Asia, all this translates into an estimated $40 billion dollar industry. Unhappy white men trek to Asia in search of love and find themselves suddenly the object of desire. Forget the fact that being white hasn’t helped make them happy in lifetimes… what’s really interesting in all this is that people who once objectified others, are now themselves being objectified. Lots of real, “intimacy” in that, eh?

Thailand leads the world in wives who cut their husbands penises off. Thai men are notoriously unfaithful and most won’t marry a woman who already has a child or is over thirty. Homosexuality, Transsexuality, and Lesbianism are so rampant that many now speculate that it must be genetic. Violent crime is up and across the developed and developing world, statisticians call this, “a fatherless generation.” So I have to wonder how using a whitening cream that doesn’t work can help get at the real issue?

Recently, a vaginal whitening wash has hit the beauty market in Thailand. It promises to make your private area “safely fairer within four weeks”. India is said to be the greatest culprit (just behind China) in creating these often toxic creams and lotions. No mention of the horrors of trafficking human sex slaves throughout Asia. No mention about the desperation women feel about being left with the responsibility of being single mothers while also being charged with caring for aging parents. But worst of all, where is the Divine Love that is a person’s birthright for just being themselves?

“Critics of the whitening trend, such as Kultida Samabuddhi of the Bangkok Post, who wrote an opinion piece on the whitening feminine wash, say such products have changed the country’s value system.

“As the definition of beauty has been changed by cosmetic industry, Thai women who fail to meet the beauty standards set by cosmetic producers and ad agencies have to struggle very hard to maintain their self-esteem,” she told the UK Guardian.

How can all this be happening in a Buddhist country where ego is to be submerged and the process that leads to Awakening involves not becoming someone else, but your own true, authentic Divine Higher Self?