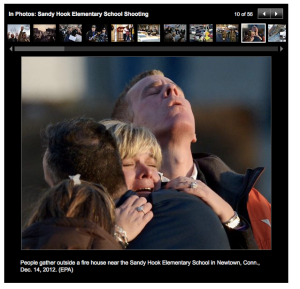 nd after a few weeks we’ll forget about it. Whites and their wanna-bees will just move … further… away … hmm… from what I see here in Chiang Mai, everyone is running out of places to run to.

But no worries… give it two weeks and gun sales will be up, more fences will be built, and the Pundits will remind everyone that the real problem is the Niggers. Denial and duplicity are the American code of Ethics. If it gets too bad, we’ll just have everyone puffing on chemically enhanced marijuana and listening to the Greatful Dead sing, “Truckin‘” as they pile into those SUVs and head further out into the gated wilderness of Limbaugh-Land.

This is bad, but I fear that Americans are doing to have to suffer a LOT more pain before they’re willing to stop voting for walking garbage like Mike Huckabee who blames the carnage on the lack of Christianity being taught in America’s schools. (Is he talking about the same “Christianity” that Right Wingers have turned into a hateful mess of hate for Muslims and everyone else who doesn’t “get with the program”? That Christianity? The one that worships money over the pain and suffering of others? That Christianity? The one that turned Jesus into a blond haired, blue-eyed White Supremacist??)

Oh yeah … that’s REALLY going to get us back to holding hands and singing, “Kumbaya“. (It’ll all be okay in a few weeks because…“We’re Number One!” Right?)

Almost every time I meet an expat, I silently thank God that this guy or gal had some other place to run to because it’s obvious they couldn’t get along with anyone on the block. Yes, the rest of the block is crazy too, but instead of addressing the social and value-driven traumas that make Americans so damn crazy, isn’t it better to just get up, walk over to the sink, get another glass of fluoridated water, turn on Foxx (Hate) News, and clean your gun?