Much of Western literature talks about Hell and its location. Dante wrote there were nine circles of Hell, and took great detail to warn–as best he could–us about each of them.

Unfortunately for the weary traveler, the Ethiopian Immigration Office located in Addis Ababa was built after the Middle Ages when Dante wrote. So THIS, is Satan’s newest domain and YOU will visit it if you fail to come to Ethiopia without getting your Visa BEFORE you arrive.

The price went up from the previous $20 U.S. dollars to $50 dollars three days before I arrived. It took me about 15 minutes to get my passport stamped when I arrived. Thirty days, $50 dollars. If you get your Visa before you leave the States, it’ll cost you $75 dollars and it’s good for two years. I … pity … the …fool … who fails to do that.

Imagine … a week.
Now think about two buildings with chairs and benches. (Yes, Hell has benches.) Now think a huge complex with many rooms … but where only a couple of people are actually WORKING in .. a .. couple of the rooms. Yes, now add hordes of people seeking to get their passports and work permits stamped also. Now, imagine a “system” that only Lucifer could have thought up. Next think of a hallway in all this complex of buildings… ONE … hallway… which you think you are lucky to arrive in because it takes you a DAY to get there… and discover it leads to five rooms. Everyone … now has to form haphazard lines that slowly, SLOWLY lead to the whichever door you also need to enter. Naturally, the lines go in opposing directions…. naturally, right?

Someone enters the door. You scoot over. People get confused how is sitting in which line going in which … direction. The jealous guy next too you has seen your shoes and knows

you’re a “rich foreigner” and somehow hates you. He’s sitting so close to you that you don’t know if he’s trying to pick your pocket or pick you up. Either way, it’s uncomfortable. Imagine middle-age women gutsy enough to try to cut the line … while EVERYONE sees them. Of course arguments ensue. The “official” guarding the door sometimes pays attention… when he’s not letting friends from his village in the room ahead of you.

Occasionally you forget that you’re still waiting. You learn a new comfort zone of closeness. You chat with people from South Sudan. You eye-fight the two slightly anxious Arab guys from Yemen or is it Pakistan? Finally you get into the room. There’s a surely very short guy who’s only English words to you are, $100 dollars in U.S. Currency. (No one has told you that you need this. Nope. Ethiopian Birr just will not somehow do.)

THAT’S when you the Ethiopian Banking System!
This is such a painful joke that … well … it’s worse than the “Immigration Office.” The normal banks are either out of money, or they won’t give you a U.S. dollar. (No kidding.) So after much walking, you’re faced with either doing business with the fickle black market who may or may not give you a counterfeit bill, OR…. you go to the “National Bank.” (*gulp*) 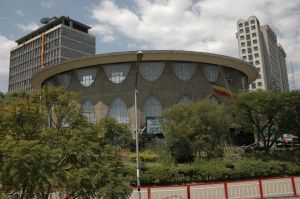 The National Bank is so bad … so very bad, that it has to be that way by design. The ATM machines don’t work. There’s no one to take responsibility for them .. and then you notice how LARGE this circular building is (remember Dante’s Hell has nine circles) and, next you see there must be over a hundred people EMPLOYED … but maybe .. six of them appear to be doing any actual … work. The rest are … drinking tea and looking at blank computer screens or actually READING THE NEWSPAPER. I won’t go on … just .. just … get your visa before you come to Ethiopia. Cambodia … CAMBODIA has a better “system.”