Those with an agenda to, “Divide and Conquer” continue to set up confusion for those they fear, the corrupt, megalomaniacal…the white super rich have been working with the people and government of Mexico to displace, enslave, confuse, bully, and murder Black American citizens. But while every problem is an opportunity in work clothes… problems can only be solved when honestly faced.

This is a HUGELY complex problem. It’s not a “Black Vs. Brown” issue. The Reconqistas (Re-Conquerers) act and feel very different than former Mexican immigrants and much more differently than hereto known Mexican-Americans and other Hispanic Americans. Black and Brown relations range wildly along a spectrum of shared feelings of camaraderie, inter-marriage, genetics, and culture.

Southern California is home to the WORST Latino hatred aimed at Blacks in the nation… and seeing how bad it is in Chicago… that’s saying a LOT. I wondered why Los Angeles Black-Mexican relations felt far different than New York … even different than Texas. SoCal is a Kill Zone for blacks who find themselves accidentally

driving in the wrong area (i.e. East L.A.) Like prison guards who pit convicts of different ethnic groups against each other for the purpose to controlling  them easier, so have the “authorities” done more than turned a blind eye to brown on black violence. *[ NOTE:

Those unhealed issues are increasing as the population of the Bay Area continues to rise. There is a large influx of people from places like Los Angeles, southern Arizona, and other border states. The only constant is change … and THIS change is right in front of our very blind eyes.

Initially I thought this was simply a problem of “Internalized Oppression” between two groups of color. But Franz Fanon wrote, “The Wretched of the Earth“ way back in 1961… this here is a Brave New World indeed.

I was born in the 50s and raised in the awareness of the 60s. I’ve My “filters” were too old to see what was happening right in front of my eyes… but a recent BART trip opened them. Like any weekday afternoon commute, the train was filled with workers leaving San Francisco headed to their homes in the East Bay, and like any other weekday commute, the seats and aisles were filled not with white or black workers, but with Indians, Latinos, and a few Asians. The media tells us they’re better workers… but frustration has shown us that these replacement workers are less qualified than the Americans they’ve replaced.

There’s an excellent new documentary coming out called, “Capitalism” and it documents how corrupt American and English style Capitalism is. Capitalism is diametrically opposed to Democracy… and “Gun Boat Diplomacy” has forced other nations to play by the rules while the Americans constantly broke them. (This is why Japan declared war on the U.S.  America couldn’t compete with them so they tried to force them into a position that was not only unfair, but far less advantageous.) And now, since it’s obvious there’s been a Corporate coup d’état by HUGE international globalist who have absolutely (and obviously) no concern for any American who earns less than three figures, it’s time to ask … WHO REALLY is behind all this?

Are Mexicans Fighting To Recover Lands that will be uninhabitable in 10 years… or less?

One school of thought is that there is NOWHERE in the United States that will be safe from Climate Change by the year 2100. More than 90 coastal communities in the United States are battling chronic flooding RIGHT NOW. “That number is expected to roughly double to more than 170 communities in less than 20 years.” New Orleans and Miami are gone. It’s passed the tipping point. Some South Florida residents are already packing up and leaving as they anticipate a 4 feet rise in sea level in the next 3 years. After Florida, the next three most affected states are California, Louisiana and New York. It’s no longer a matter of, “IF” … but “WHEN.”

Where will all these people go? 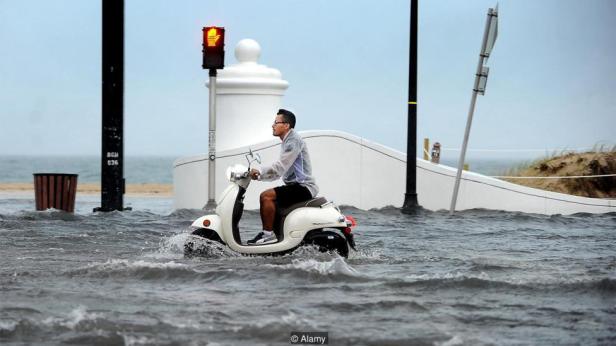 It appears that despite all of mankind’s efforts to put in hard work and to kill and die for “God and Country” … we’re still social beings left with either surviving together– or dying alone. Yes, there ARE some Mexicans and Central & South Americans who’ve heard the marching orders to run out blacks to make room for more of their kin. But they could only get away with it if someone had given them the green light.

In a 2001 article on Latin America web portal Terra entitled “Advancement of the Spanish Language and Hispanics is like a Reconquista (Reconquest),” Elena Poniatowska wrote:

A U.S. media outlet recently stated that in some places like Los Angeles, if you didn’t speak Spanish, you were ‘out.’ It’s sort of a reconquista (reconquest) of lost territories that have Spanish names and were once Mexican.

[With a cordial tone, taking pauses, and with a smile on her lips, the Mexican writer commented with satisfaction the change that is happening in the U.S. with regards to the perception of Hispanics and the progress of the Latino community in migratory migratory movements.]

The people of the cockroach, of the flea, who come from poverty and misery, are slowly advancing towards the United States and devouring it. I do not know what is to become of all this [in reference to the racism that can still be perceived in the U.S. and other countries], but it [racism] seems to be an innate illness in mankind.”

— Source, Terra, 2001. Advancement of Spanish language and of Hispanics is like a Reconquista (Reconquest)

WHAT A COMPLEX ISSUE!!

So while African Americans are conditioned to see Latinos as allies in the battle against racism and oppression and therefore are hesitant to even lift a voice against them… many of them feel they are in a “war” of “Reconquest” to take over lands lost centuries ago!

“….in some places like Los Angeles, if you didn’t speak Spanish, you were ‘out.’

These are indeed … strange times.
How can there be so many battles within one nation at one time … and even the top seems to be against the citizens of the United States. Factoring in the Fukushima Daiichi nuclear disaster and the Gulf waters disaster, Global Warming and all the other environmental disasters that have gone passed the tipping point, are Mexicans fighting for a land already doomed?

One thought on “Mexican- Latino Violence Against Blacks”