If you’re a Black man … make no mistake about it… you’re at war. 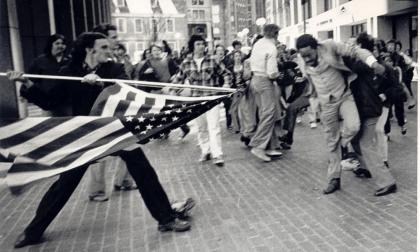 In fact, you’re surrounded. But don’t despair, because this–for you–for you, is great opportunity. See… you ARE your ancestors and every cell in your body is their wisdom and skill talking to you, telling you: “We’ve been here before.”

We have the road map, and many of the tactics. True, some need to be updated, but being surrounded at this time is indeed a great opportunity to make new alliances with allies–most of whom are mad and angry at each other… because “Divide and Conquer” has indeed done it’s job.

There are three definitions of power that are applicable to us today:

“Power is the ability to define a person’s reality and have that person accept that definition as if it were their own.” ~ Michael Foucualt

“Power is your ability to influence the world around you towards your best interests.” ~ James Hillman

At this time bro… it’s CLEAR you do NOT need no more break dancing, blunts, broads, or booze. You need a PLAN. And while you don’t need “broads” … having a GOOD woman is extremely valuable … but you’ll only acquire one if you know your plan and show it to her so she can see if she wants to buy in. Same is true if you’re gay or lesbian.

If you roll up your sleeves and begin working towards getting smart, you’ll find your greatest pains and traumas will become our greatest gifts. WORD: This is not the 1960’s and you’re not a part of “Trump’s America.” And unless you want your future address to be “D Block” you’ll turn OFF that TV, put those video games away, because we truly are now living in days of Corporate Fascism … and if you don’t start doing things differently, it’s likely you’ll spend time in a tent city, a privatized prison, or a mental ward.

Things You “Should” Let Go Of

Leave your home if there’s no work in that city. There’s a ton of ways to get a truck driver’s license. After age 25, take two years out of your young life and get paid for traveling the country and seeing how many ways it is to make a living. (BTW, women are some of the best truck drivers. It’s no longer about muscle–it’s a skill.) If you find yourself sweeping streets, “Count It All Joy” and head for a J.C. that teaches Horticulture and get an 18 month certificate that allows you to have a LICENSE. Then as you’re walking, notice the stores and large businesses with grounds that need caring for… plants and shrubs that need attending. Take PRIDE in your work and watch the coins come flowing in.